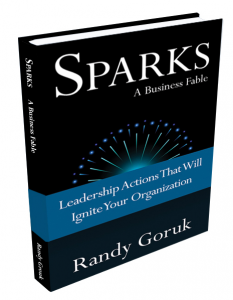 “The Tale of Jack Sparks” is a business fable that unveils a leadership platform containing six core leadership competencies. To reveal the competencies and the leadership lessons that accompany them, we spend a day with a Jack Sparks. He’s just an everyday, ordinary ‘nice’ guy.  Jack is a loving husband, a good father, a baseball fanatic, a successful sales manager for a mid-sized company in the building products industry and a leader everyone wants to follow.

As with many other managers, Jack has faced some significant challenges over the last few years - the bad economy, increased competition, changing environmental and regulatory mandates, even backstabbing office politics. But no matter what fate has thrown at him, Jack has been able to ride through every storm, in large part because of the leadership platform that he built with the help and guidance of six key mentors in his life.

But now Jack is up against the biggest challenge of his life and his career.

He is one of two internal candidates being considered for promotion from Sales Manager to Vice President of Operations for Belles Building Products. The other candidate is John Saunders, Sales Manager of Specialty Building Products. Ten years Jack’s senior, the power hungry John Saunders is the odds-on favorite to be chosen for the position because of his past leadership experience as President of a smaller building products company. Having joined Belles two years earlier, John is willing to do whatever it takes to get this promotion - even if it means ruining Jack’s reputation, his credibility - and maybe even his life.

Do nice guys like Jack really finish first?  Or will the John Saunders ‘cutthroat, every-man-for-himself, do unto others before they can do it to you’ mentality win out?

Like a ‘fly on the wall’, we spend time with Jack on the day he will learn if he was promoted. During the course of the day, we observe him in action and gain insight from his reflections on the valuable leadership lessons he learned from his former bosses. We also learn how putting these six leadership elements into place can help any leader achieve organizational stability.

Listen to a Chapter